April’s closed residential transactions as reported by the Great Smoky Mountain Association of Realtors MLS database tallied only 117, at least as of right now. As always, there will certainly be late reports of closings and I expect that the final tally will probably be closer to 130. This would at least surpass April 2011’s sales but not by much and nowhere near match the very strong total of 151 homes sold during April 2010. The strong performance back in April 2010 was caused by the end of the federal government’s first time home buyer tax credit incentive. Furthermore, April 2012’s lackluster performance will likely not be better than the numbers from 2008-2010 as all of the 2012 first quarter’s results were. For folks who (like me) generally prefer to see data in table form, here is the latest: 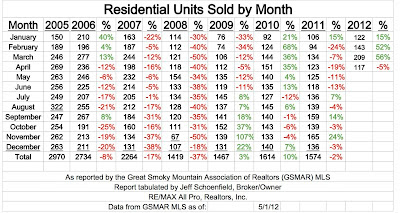