With a LOT going on in my business and personal life over the last couple of months, I have done a horrible job of posting to this Gatlinburg real estate blog. Although I have personally recorded nearly 120 sales already during 2012 (with the assistance of an awesome support staff), that level of activity has taken a real toll on some peripheral pursuits such as this blog. Taking a solemn pledge not to allow this to continue, I am finally making up for lost time this evening and marking a new commitment to posting more regularly to this all too often neglected blog site.

Now that August is nearly over, I guess it is high time to post about the sales that our Great Smoky Mountain Association of Realtors board recorded in July. During last month, residential sales as reported by our MLS database were again ahead of July 2011 but by a much less impressive percentage than was recorded during EVERY month of the first half of this year. Here is the table: 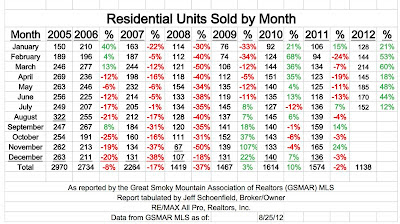 As you can see, July wasn’t a bad month at all with 152 residential homes sold. In fact, for the 7th month consecutive month, local real estate agents in our Gatlinburg area market posted the best number since the pre-bubble 2007 year in which the good times were rolling indeed. Still, the percentage increase above 2011 paltry sales wasn’t nearly as impressive as was recorded during the months of the January-June 2012 period. I guess that a win is a win but I would rather seen the values knocked out of the park again, not just barely scooting over the wall. Way to early to say much about our Gatlinburg area real estate market’s performance during August but we will have those numbers soon enough and I promise to report them promptly this time!!