Way back in June of 2007 a group of investors led by John Turley purchased 200 acres of prime land at exit 407 of Interstate 40 with a grand plan to create a huge project similar to the very successful Turkey Creek development in West Knoxville. Unfortunately there was a LOT of excavating to turn the large hill into a developable site.  This preparation included the removal of a great deal of rock and by the time the site had been significantly prepared, the great real estate recession was in full swing and the Dumplin Creek project was put on hold.

With anchor tenants not willing to commit to leases, the project languished and eventually the loans were called due. Mr. Turley was sued by the project’s lenders and a sale was planned to transfer the property to new owners, the father and son Joe Fielden (Sr. and Jr.) team. Although the sale was announced in March 2013 it does not appear to have closed yet as negotiations for the project have continued.
Most recently, the City of Sevierville began to seriously consider providing $4 million in funding for the construction of a road to access the property. These funds would match an additional $4 million being sought in the form of grants from the state of Tennessee. Under the plan, the developer would use these funds to construct the road at an estimated expense of $9 million. Under the proposal offered by the Fieldens, any expense above the $8 million in combined state and city funding would be their responsibility.
The site is quite a project indeed as can be seen from this aerial photo I took today: 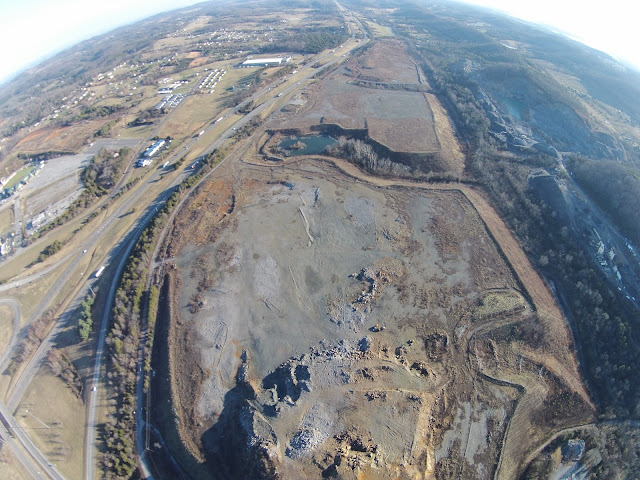 While the City of Sevierville has never assisted a developer with infrastructure funding this may in fact occur. Although I am not in favor of our local government giving developers money to assist in development this would create lots of jobs of all types for the Kodak community at the north end of Sevier County.
At the meeting of the City of Sevierville’s Board of Mayor and Aldermen meeting Monday night, this lack of precedent was discussed. A decision of this magnitude should not be made quickly and it appears that this is still a matter to be settled. Stay tuned…